Getting Started with AIR for Android

We have for some time the possibility to create applications for Android with the Flash Platform, using Adobe AIR or Flash Player. Moreover Android is becoming increasingly more popular, various devices emerge every day more and more powerful running the operating system by Google and Android Market has been redesigned to facilitate the users and developers. An important detail is thatare not all versions of Android that support Adobe AIR and Flash Player, you need to have the smartphone Android 2.2 (Froyo) or later, and versions of AIR should be 2.5 or Flash Player 10.1.

Developing applications with the Flash Platform for Android is only possible from the Android 2.2 (Froyo) and using Adobe AIR 2.5 and Flash Player 10.1 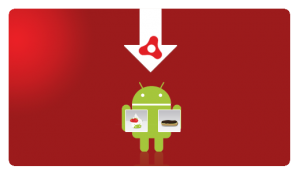 Adobe Flash CS5 Professional – It is possible to develop applications for Android using Adobe Flash Professional CS5, in the last version was added a profile “AIR for Android” already generating the file with the default size of 480×800. So far there are no pre-programmed components and Android is not recommended to use the existing ones in Flash.

Adobe Flash Builder 4 (burrito) – Adobe released with Flash Builder 4 (burrito), the Flex SDK version 4.5, with components optimized for mobile devices, for those who remember, Adobe had a project of a mobile version of Flex to call “Slider”, because of the rapid growth of processing the current smartphones, Adobe decided to join this project to the standard Flex SDK.

Distribution
You can run the installer of your application by Flash Builder, Flash CS5 or by command line using the ADT. It generated an application with the extension .apk. The distribution can be made through the Android Market to become a publisher of Android Market, simply pay the $ 25 enrollment.
Watch this tutorial how to publish your application on Android Market
If you create something to run in Flash Player, simply turn the browser on your smartphone, Adobe has a page so you can see some sites that use Flash Player, and have been optimized for mobile. Access Adobe Flash Showcase for Mobile